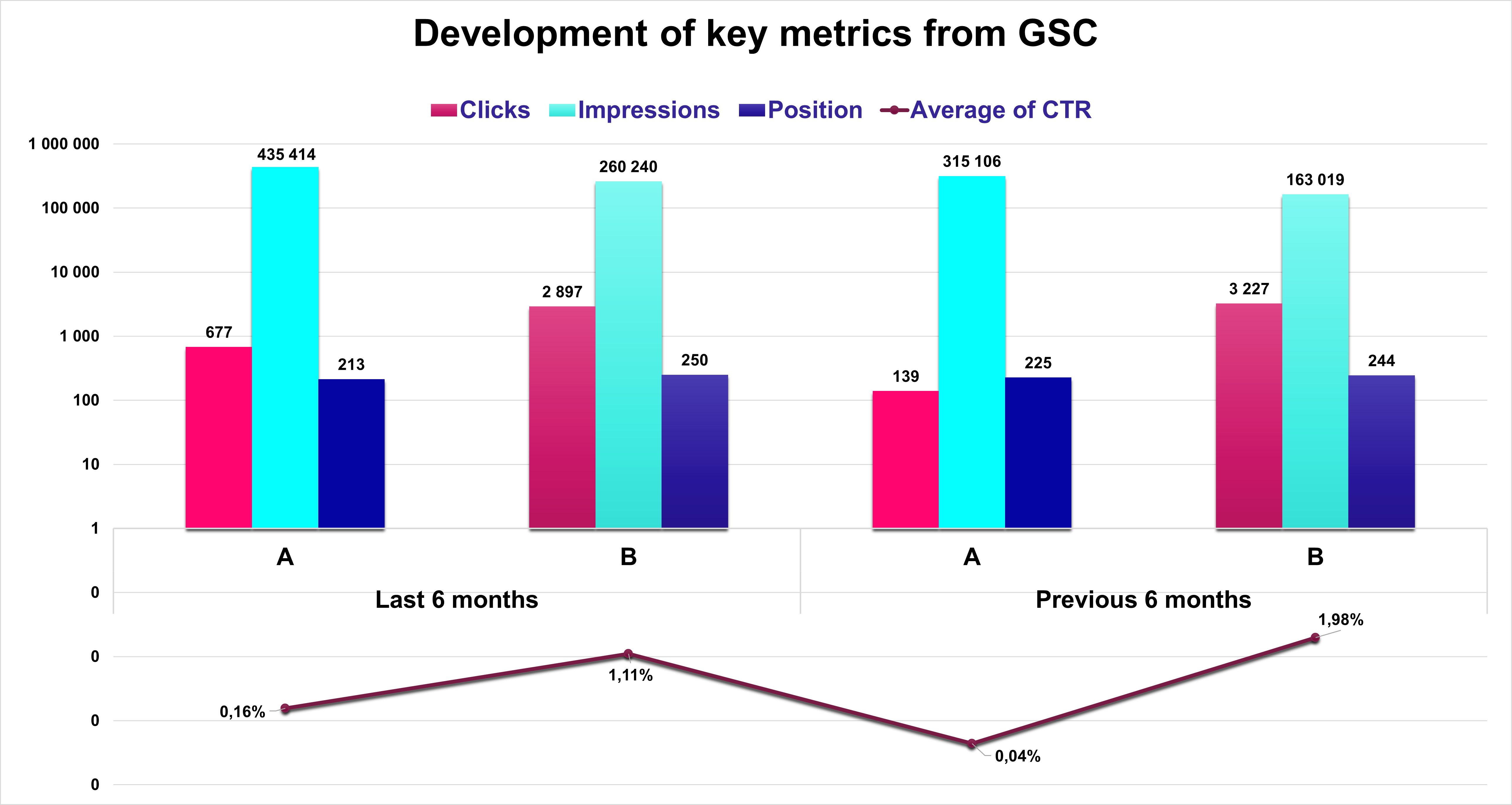 Our case study was based on collaboration with rossum.ai, a company whose goal is to ‘process the most invoices in the world.’ Their product focuses on extracting data from business documents of all types, in order to cut down on manual data processes, thereby making their clients’ more efficient in their daily work.

We set out to determine whether or not our in-house designed content planning tool – Boom’n’Rank – was up to the challenge of helping Rossum design, format and craft content (in this case – blog posts) in a manner that was both useful and more efficient for those involved in the process of creating the copy as well as beneficial and effective for the company.

From February 2020 until August 2020, Boom’n’Rank supplied new topical issues and detailed, structured content plans which the content writers at Rossum used to write new blog articles for their site.

There is a lot of content on the web these days and most of it gets lost on the wayside. Companies fight to be visible to their clients, and one of the ways that they can do so is by creating rich, captivating content in order to draw potential customers to their website.

On top of that, finding new and interesting topics about which to create content can be time consuming and therefore costly.

Longtime SEO expert Martin Kura, and head of GFluence, along with a team of programmers, product testers and marketers, have designed and developed a content planning tool which can address all of those questions and offer one easy solution. Boom’n’Rank was born from Martin’s desire to help clients create content that would drive traffic to their site, and to do so in a calculated and scientific manner with measurable results.

Top ranking refers to pages which had some of the highest clicks and impressions overall as seen in Google Search Console, which measures organic traffic to a website.

We made it a point to go with these top performing blogs (from a pool of over 80) in order to highlight the fact that without cherry-picking the results, Boom’n’Rank content still performs better than the previously in-house blogs created by Rossum.

After working with rossum.ai and running the numbers, we have demonstrative proof that our pride and joy – Boom’n’Rank –  does in fact help content to rank better compared to content created and developed without our tool.

As shown in the introductory key stats, Boom’n’Rank developed content does better in every category possible from the data gathered on Google Search Console – clicks, impressions, CTR (click through rate) and position. 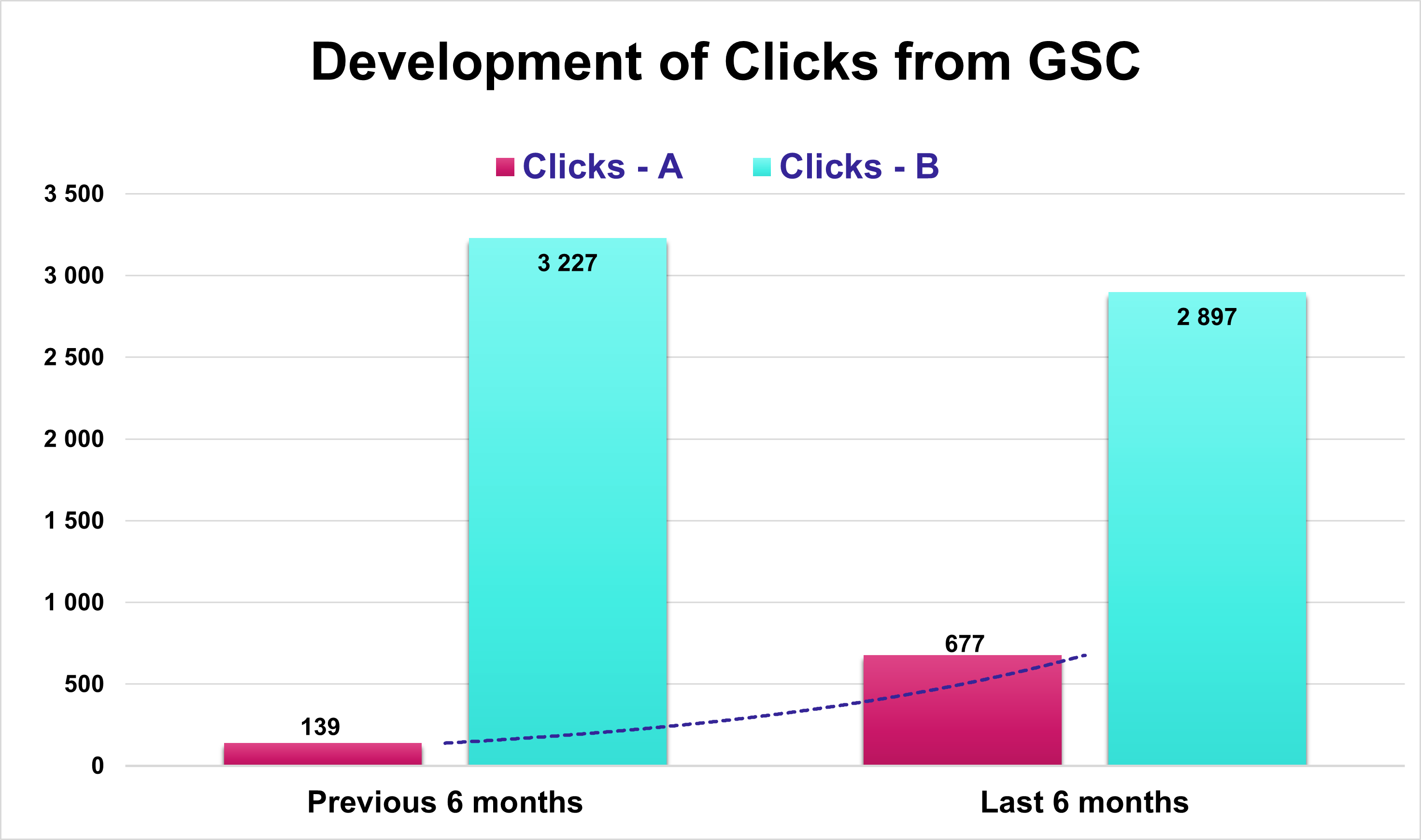 Impressions increased for all content, but content A still had double the impressions throughout all time periods.

The position of content A decreased several positions, which in this metric is a positive trend as the goal is to get to position #1 in any search engine. During that same time period, content B actually increased in position, making it is getting further from the coveted position #1.

This is a clear indicator that content A is stronger in every measurable aspect: it ranks higher, gets seen more often, and gets more clicks.

Age plays a factor – but not like it normally does

Usually age is an advantage for content on the web. The longer content is online, the more chances it has to garner more impressions and clicks, thereby helping the position and CTR. Taking this into consideration, the older content created by Rossum’s in-house team should typically have better scores in the four metrics we are analysing. However, this newer, ‘younger’ content created by Boom’n’Rank is doing better than the ‘older’ content, which speaks volumes to the abilities of this tool.

Content on Google is measured by various dimensions and features, one of them being the E-A-T principle. The improvement across the board of all metrics means that the Google algorithm has determined that these newly created pages meet E-A-T standards (Expertise, Authoritativeness, Trustworthiness). The newer content, while younger, proves to be at a higher level of these factors: expertise, authoritativeness and trustworthiness. It is competing better with other content on the web for similar keywords and topics than content produced before our collaboration with rossum.ai.

Boom’n’Rank successfully suggested creative and interesting topical ideas and then created structured content plans for those ideas which brought more traffic to Rossum’s website. Our tool’s outputs allowed Rossum’s writers to create content particular to their industry and their clients in an authoritative and trustworthy manner, thus competing with the top echelon of content for the given topic. They were able to follow the instructions given by Boom’n’Rank in terms of word count, body and header structure, use of images and external links without having to debate among themselves whether or not to do so, how long to make a post or what topics to focus on.

Rossum has reported that they are extremely satisfied with the results, noting that their copywriters found it easy to follow the content plans, saved time in researching and planning which topics to write about and feeling confident in knowing that they would be generating content that would reach more viewers and ultimately more clients. 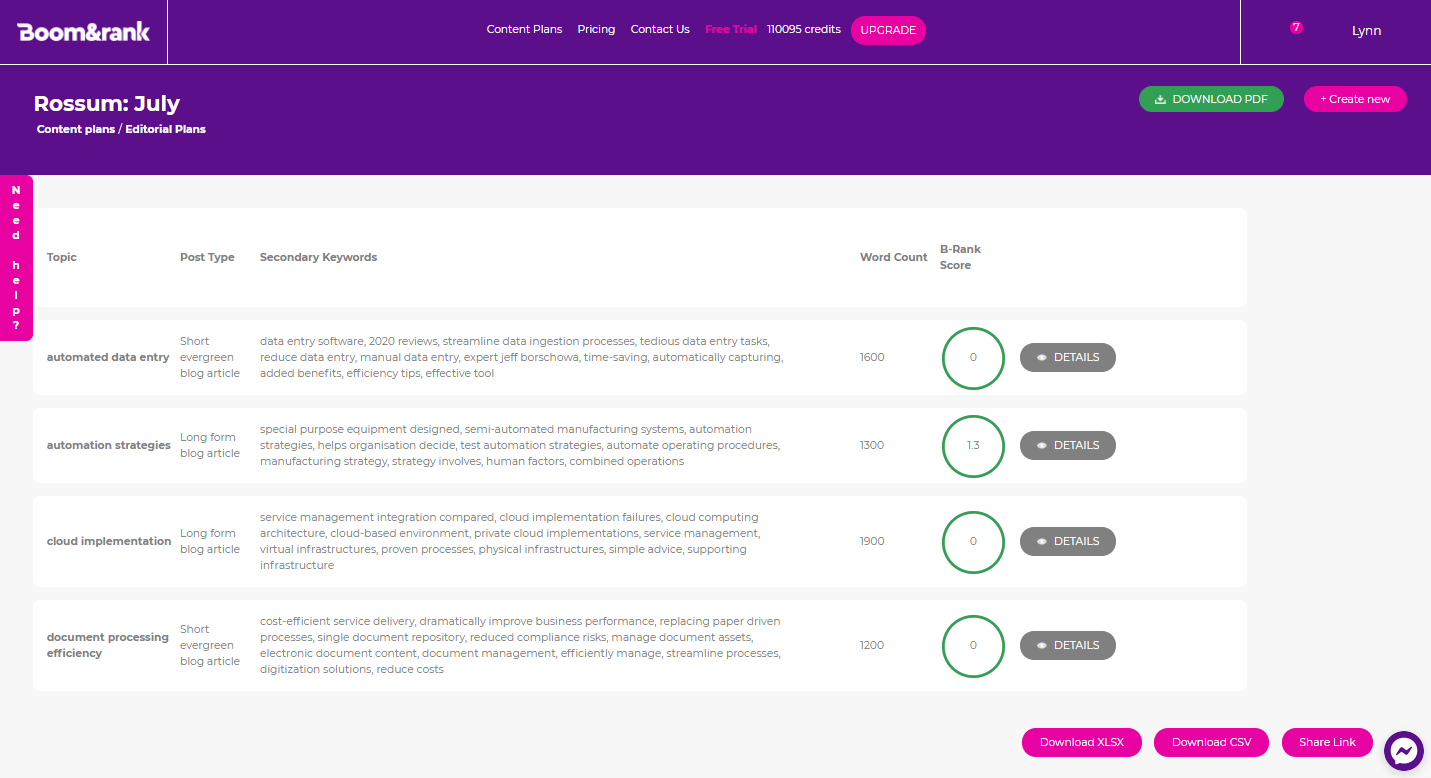 Looking to do the same?